Happy Labor Day! This holiday is used to celebrate people throughout the United States who have hardworking jobs, but where is the labor day for working dogs? They work just as hard, for long hours without pay (besides love and treats).  Let’s take this opportunity to recognize their amazing work.

War dogs have been around for centuries. They have been used by Attila the Hun, Napoleon Bonaparte, and William the Conqueror, among many others. Dogs are used in times of war because of their loyalty and strength. Though dogs have been worldwide for a long time, America does not have quite that extensive history. Native Americans used dogs to keep watch, but Americans descended from the British did not start using dogs until the end of WWI. Even then, the dogs were trained by the French and English. Since the first military dogs were trained and used in battles, they have gone on to do amazing things.

Greeks, Persians, Babylonians, and Assyrians were the first to use dogs as police dogs. They were also used in the search for the infamous Jack the Ripper in the 1800s. Though they were unsuccessful in that endeavor, they are great assets. The American police force used dogs in the 1970s. Since then, the dogs have helped to keep billions of dollars worth of drugs off the streets and prevent suspects from running because, honestly, who would try to run from a snarling German Shepherd? 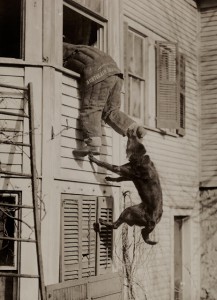 Police Dog in training, circa 1919

Therapy and assistance dogs do great things to help civilians. (It’s alright if you don’t know the difference between the two. You can find that out in this previous article.) We have been working with therapy dogs, who do great things, such as visit people in hospitals, for quite a while now. With your help, 1FUR1 hopes to get our first ever service dog program off the ground. Service dogs transform lives, giving people with disabilities newfound freedom and independence.

All working dogs have been valuable additions to the lives of their handlers, and most likely the lives of many others. So, if you know any working dogs, be sure to give them extra pets and treats this Labor Day.