From Cardboard Box to Selfie Stars

While cats have always been popular pets, they have arguably exploded in popularity due to their cute antics being shared in photos and videos on the Internet. In honor of National Cat Adoption Month, I caught up with my friend Caleb Peng of Caleb Peng Productions and chatted with him about his cats Cheggy and Cranberry. His Instagram @calebpeng boasts over 6,000 followers and pictures and videos of his cats have been featured by Cats of Instagram and Delightibles cat treats. So how did Cheggy and Cranberry go from homeless kittens to picture-purrfect selfie stars? Let’s find out:

What initially prompted you to adopt a pet? And why did you choose cats, specifically?

I never really liked cats until the summer of 2011. My roommate was house sitting her friend’s cat for two weeks and I was sleeping on the futon in the living room at the time. My friend was gone for most of the two weeks due to her internship so the kitten spent most of her time with me. I used to think that cats were unfriendly and easily irritated (not to mention their sharp teeth and claws!). However, this kitten was quite playful and cuddly. She slept with me on the futon every night and gave me some affectionate licks every day. This kitten changed how I thought of cats. Cats may not swarm strangers with excitement likes dogs usually do, but they also have the capacity for love and companionship.

I’ve never had any pets, outside of fish, prior to Cheggy and Cranberry. I wasn’t anticipating adopting any pets this past year until my friend, Neil, found four kittens abandoned behind a warehouse. 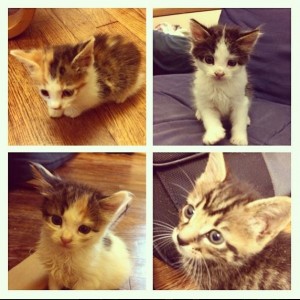 Clockwise from top left: Cheggy, her brother Stinky, her brother Buu, and Cranberry as they appeared soon after Neil rescued them from the cardboard box he found them in on June 15, 2014. Photo from @gracefacesplace on Instagram

Long story short, the two female kittens of the litter needed to be adopted so I gladly took them in. I like dogs as well but these two kittens happened to be the ones that needed a home at the time. That is how I started to became “the guy obsessed with his cats.”

What was it about Cheggy and Cranberry that initially drew you to them?

Besides a photo of Cheggy and Cranberry when they were only about a week old (Editor’s note: pictured above), I never saw or met them prior to adopting them. I guess you can say I took a gamble on adopting kittens I never met before, but I believe that I would have loved them regardless of their looks and personalities.

How did you get in with the Instagram cat community? Were you surprised when Cheggy and Cranberry gained a large following?

Prior to having Cheggy and Cranberry, I mostly just Instagrammed about my personal life and my hobbies. I followed a bunch of pet owners prior to being one myself and had a general idea of how they got their following. I knew that posting photos and videos frequently would definitely increase my chances of having more followers. In addition, I submitted cat photos to various users that were featuring photos they liked.

The biggest features we received were the two times Cats of Instagram featured Cheggy and Cranberry. Cats of Instagram has 3.4 million followers, resulting in a couple hundred new followers for my Instagram whenever a photo of Cheggy and Cranberry was featured. I was also contacted by a marketing agent commissioned by Delightables, a company that sells cat treats, to host a contest. I selected a winner out of those that entered the contest and Delightables sent the winner and me a bundle of their treats.

In addition to connecting with others on Instagram, it is important to remember that the quality of the photos and videos matter. My mom purchased me a Nikon DSLR for my Christmas present and I believe the increased quality of my photos and videos has really helped Cheggy and Cranberry shine. 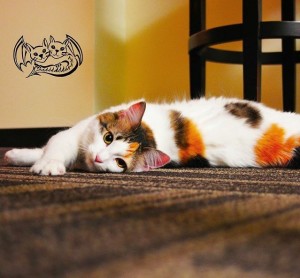 Tell us about one of your favorite fan interactions on Instagram.

I had a conversation through the Direct Message feature of Instagram with @momomony, who has 18 cats. I was fascinated with the fact that she was able to maintain such a large family of cats. She explained to me how she took care of her cats and the initial difficulties of raising that many. I will likely adopt more pets in the feature so it was a very informative and interesting conversation.

One hashtag you use a lot in your pictures is “#AdoptDontShop.” Why do you feel that it’s important for people to adopt and not “shop?”

In all honestly, I used to want a bred cat (specifically a Savannah Cat). I watched videos of bred cats and thought that I’d be missing out if I had an “ordinary” cat. However, I have learned that all animals are deserving of a safe and comfortable home, especially those that are abandoned. I’m not sure what would have happened to Cheggy, Cranberry, and their two brothers if Neil didn’t find them in time. All I know is that there are so many more cats outside that don’t have a home and may never have a home.

At the end of the day, I cannot support breeders while there are countless starving and dying cats outside. Like many other cats, Cheggy and Cranberry may not remember being hungry, cold, rained on, infested with fleas, etc. I’m grateful for the chance to make sure that they’ll never have to experience that again. And I thank everyone else who have chosen to adopt over shop for pets.

And we thank you, Caleb, for taking the time to answer our questions. He documents Cheggy and Cranberry’s daily kitty antics @calebpeng on Instagram.