Every dog is special. They all bring something to the table. Even when the odds are against them, they continue to be happy pups with lots of moxie. For Pet Birth Defect Day, I’m going to highlight three examples of amazing dogs who don’t let anything, especially not some pesky little birth defects, stop them. 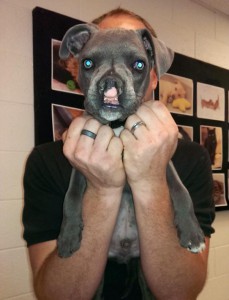 Stitch, a two year old Pit Bull, is not the stereotypical version of beauty, which made his getting adopted a bit difficult. He was given a new lease on life when he was adopted by a young mother of two. He and the two children shared the same condition: all three had cleft lips and palates. “I just wanted to show my kids that they are not alone,” Rodman told KRNV-DT Reno. “It’s not only other humans that have this, cleft lip and palate, but animals have it also.” Stitch was not trained differently from other dogs; he just showed everyone that pets with birth defects are like the rest of us. Everyone deserves love and happiness. 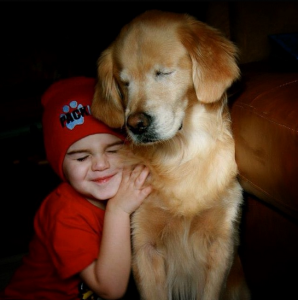 Smiley is not only a cute puppy name, but also a perfect description of this next dog. Born without eyes, this sweet Golden had a ruff time growing up (pun intended). He was rescued from a puppy mill when he was between one and two. Like most puppy mill survivors, he was very anxious around new things. After tons of patience and training from his handler, and the start of an adorable friendship with a deaf Great Dane, he became the paradigm of well-behaved dogs. He is now a registered therapy animal and lights up the lives of those he meets. 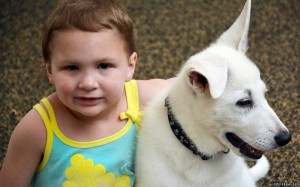 I know you’ve probably had your fill of cuteness, but bear with me because we’re almost done. Last but certainly not least on the list is Lt. Dan. Here we have your typical relationship between a young girl and her pup: they’re basically joined at the hip, with the puppy happily trotting along behind his master. The two share many similarities. They are both playful and share a curiosity about the world around them. Sapphyre had both of her feet cut off due to a birth defect. When she last went to the hospital, she not only returned with a pair of snazzy new prosthetics, but also with a puppy. Lt. Dan shares her condition, but of course, never lets that stop him.

Birth defects don’t make anyone less than. They make each person unique. As Sapphyre’s mother said, “..being different is not bad. People, even pets, no one is exactly the same. That would be boring.”