Happy International Homeless Animals Day! While it’s somewhat depressing that we need this holiday, people around the world are doing amazing things to help homeless animals. Let’s take a trip around the world to see some examples of people celebrating our relationship with animals via festivals or ingenuity.

The second day of the Tihar Festival celebrates our friendship with animals. The five day festival  The dogs are adorned with garland and colored dyes. And, of course, given plenty of treats. There is even a special ceremony for police dogs. 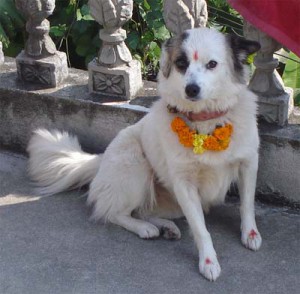 Picture: One of the dogs at the Tihar Festival being pampered with garlands.

The Surin Elephant Round-Up celebrates our unique relationship with elephants. Held on the third Saturday of November, this event involves more than two hundred elephants who entertain people with various tricks, including folk dancing. Beginning in 1960, this festival has religious history as well as the obvious cultural significance. Elephants are revered in Buddhism, so this event is celebrating the history of elephant hunts, where rituals were performed. Though this festival has become more modern, with elephant soccer games and tourists more than welcome, the roots of the relationship between the people of Surin and these gentle giants. 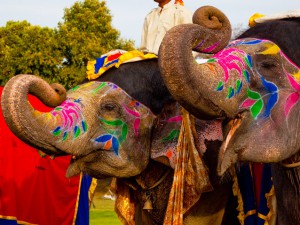 Picture: An annual event held in Jaipur, the capital city of Rjasthan honors elephants and the significant place they hold in Indian society.

An annual Golden Retriever festival is held annually by the Golden Retriever Club of Scotland. This event is as amazing as it sounds – a huge collective of golden retrievers running around in a field. This event, called the Guischan Gathering, has taken place every July for the last nine years. Might just be me, but I think this festival is a snapshot of what heaven looks like. 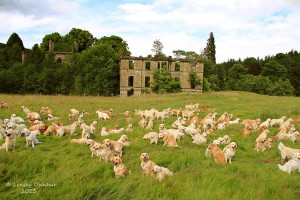 Picture: This event, started by the Golden Retriever Club of Scotland, seems to be the perfect way to spend a summer afternoon.

A different version of Groundhog Day is celebrated. Instead of adorable, sleepy groundhogs, competitive worms are involved. Yes, you read that right. At the Banner Elk Woolly Worm Festival, worms race. The winning caterpillar then analyzed by forecasters, who use their findings to determine what future weather will be like. Of course, winners aren’t born – they’re created. Each caterpillar has a coach; the victorious coach receives $1000 and the most unusual bragging rights.

Homeless dogs are everywhere in Sochi. You may remember post-Olympics, American athletes wanted to bring some of these pups home. They were successful, and since then ten dogs have been brought to the US. Though this is not a festival, it goes back to the real goal of this article – to teach people about International Homeless Animal Day and how to help homeless animals in their community. Also, it lets us think about big, strong athletes, such as Gus Kenworthy, carrying around adorable little puppies, which is always a nice image.

Picture: Aforementioned Kenworthy and his new puppy, in a picture he posted to Twitter.

There is another competitive festival – but this one involves bunnies, rather than worms. As a former owner of two dwarf rabbits, I could be biased, but I’d say this event is cuter than the one taking place in NC. The fluff-balls compete in rabbit hopping competitions, which would be purely instinctual, if it not for the leashes they wear while competing and the trainers they have to ensure they win. Rabbit hopping is very prestigious, as it takes two to three years to get a rabbit ready to compete in the big leagues. Though this is quite a commitment, the results are utterly adorable and surprisingly graceful.

Traveling back to Thailand

Thailand seems to be a wonderful place for animal festivals. This festival combines animal appreciation with another fan favorite: all-you-can-eat buffets. Let me introduce you to the Monkey Buffet Festival. Held at the Angkor Wat Khmer ruins, this festival provides sweets, soft drinks, vegetables, and fruits (especially bananas, of course) for the myriad of human and thousand of monkey guests. The Khmer dynasty built many Hindu temples, including Angkor Wat. Since the monkeys took over these ruins, it’s only fitting that this festival is held there to honor the marquee monkeys. Held at the end of November, this is a great alternative to a traditional Thanksgiving feast. 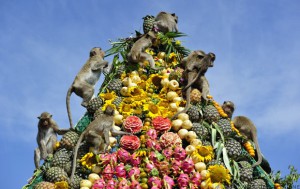 Picture: www.theworldfestival.net offers us a sneak peak at the food pyramid at the Monkey Festival.

The annual Birds of Chile Festival is each October. This four day festival includes bird watching excursions and talks by bird experts. You also get the chance to see amazing ecosystems and the beautiful coast of Chile. Meet your fellow bird lovers and see some of the beautiful Chilean birds. Be sure to print out a list of the many birds to see how many you can spot!

Picture: The Andean Condor is the national bird of Chile and one of the many beautiful birds you can see during the Birds of Chile Festival.

Some kind geniuses invented a machine that dispenses food for stray animals every time a bottle is recycled in it. It’s a super cool way to help the environment and pups and kitties in need. If you’re ever in Turkey, be sure to bring as many recyclables as possible for these machines. Though this is not a festival, it deserves to be included on this list because of its extraordinary feat of helping these homeless animals.

How can you help?