Valentine’s Day is a holiday dedicated to cuddling up and spending time with the one you love most. You know, the one who is always there for you, who picks you up when you are down and never complains about how you spend your days (so long as you spend them together). Most people spend this day with their significant other, but we all know that the traits listed above apply to pets, too.

Your pets are always there for you, and grateful for the little things you do for them. Don’t forget about your pet this Valentine’s Day – show them you love them by giving them a new toy, or a treat, or taking them to your local park. Remember at this time how fortunate you are and please donate to worthy causes, such as your local animal shelter, rescue, or charity. Also, using Goodsearch.com (an alternative search engine) and entering 1FUR1 Foundation as the charity of your choice could never hurt!

Happy Valentine’s Day, from all of us here at 1FUR1, and from all those who contributed pictures and stories: 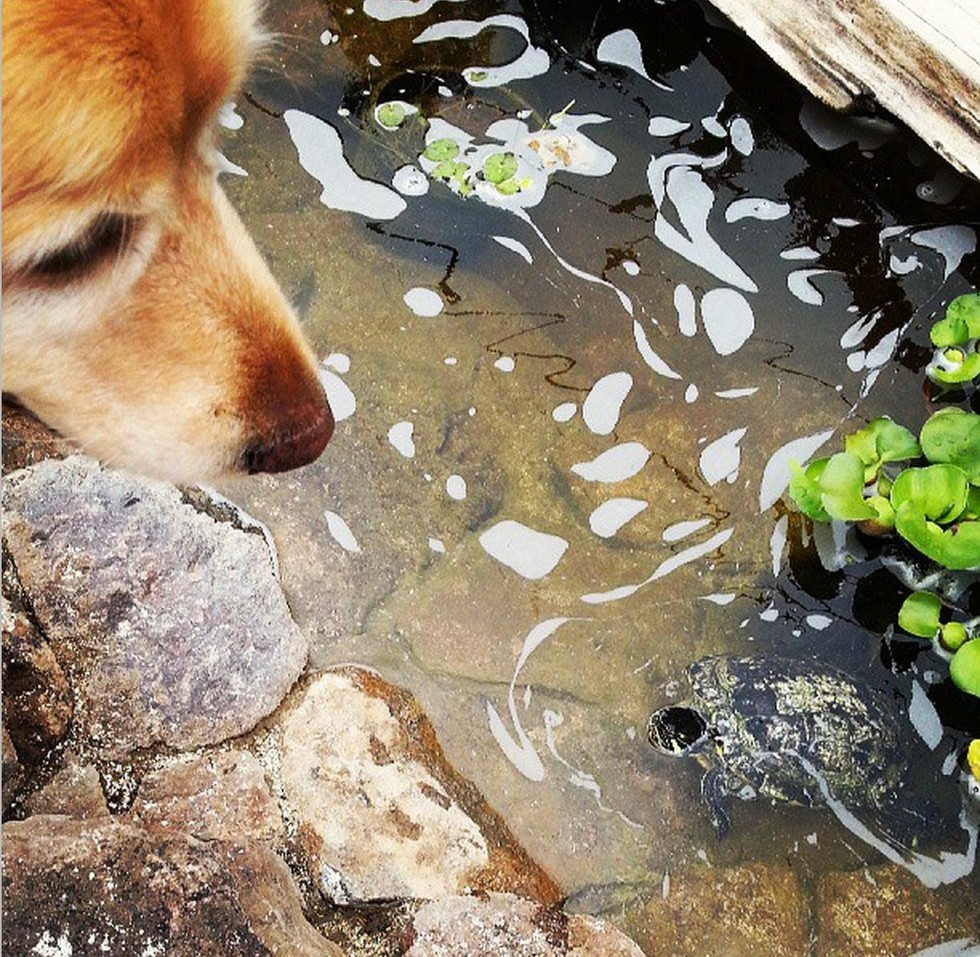 “At a young age, I adopted a small turtle, Leia, who was far more sassy than I could ever imagine. For the first couple of years I had her, she was never around other turtles; the only other animal she knew was my seven year old golden retriever, Abbie. Even after Leia was joined by three other turtles, she and Abbie had a close bond and could be seen spending time together.”  – Source: http://instagram.com/p/a9Oy6Zr9A3/?modal=true 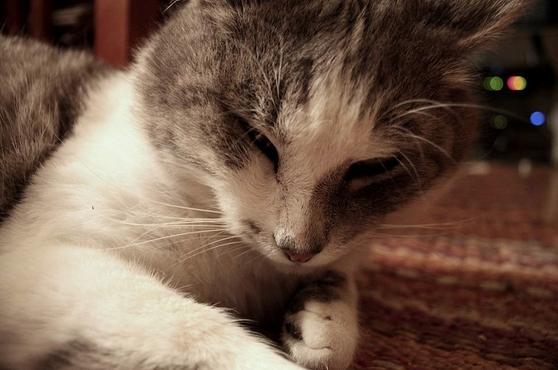 “One of my favorite memories with Snuggie was probably when we would sit on the couch and watch TV. He was named “Snuggie” for a good reason – he would snuggle with you and take a nap. You could also wipe the floor with him and do a lot of weird things with him because he was so laid back and didn’t care. I miss that sweet cat everyday, and think about him a lot.” – Source: Aly Basa 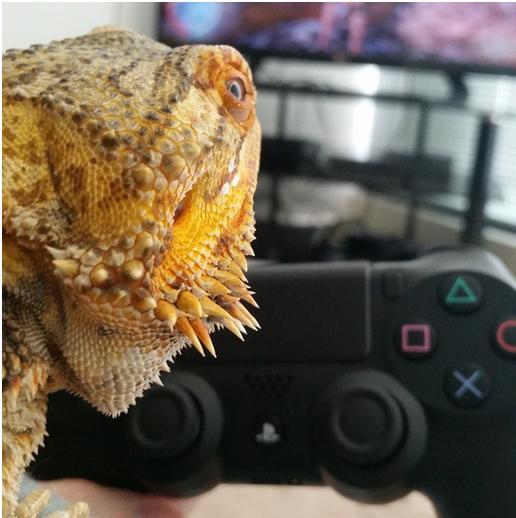 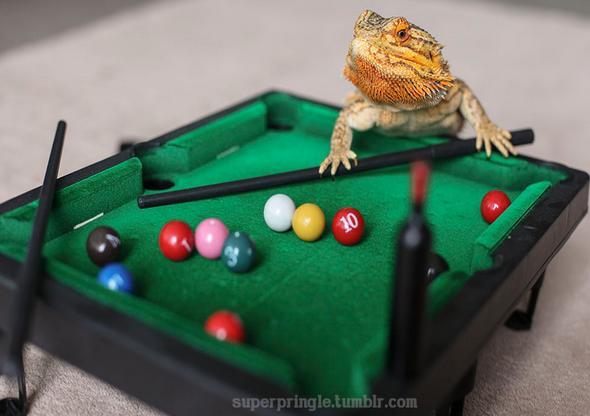 “When my bearded dragon, Pringle ,and I don’t feel like doing much, we like to have lazy days playing video games. He also has many other skills, including a knack for playing guitar and playing pool.”  – Source: http://superpringle.tumblr.com/post/108695154321/lazy-day-gaming-with-pringle 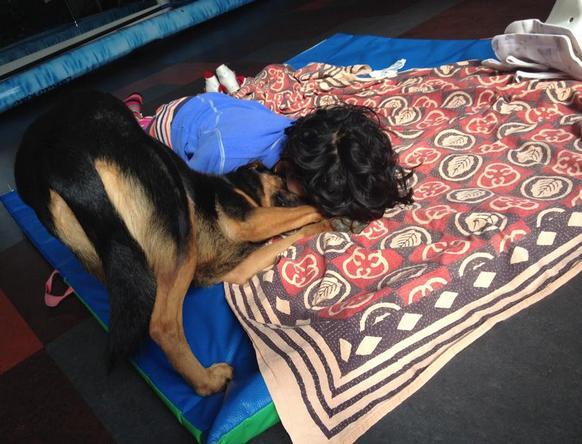 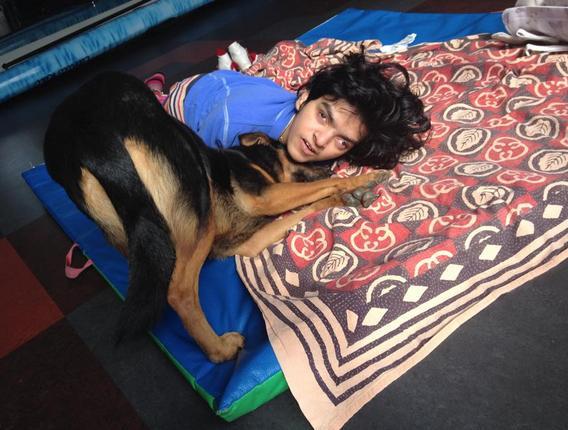 “Any animals with my sister is adorable. It’s really cool to see her connect with animals, especially dogs, because they can communicate in a way with her that we can’t. It’s so amazing to see the love she receives from these dogs and the love she gives back to them. All dogs are also unbelievably sweet with her, like they are always aware of where she is.” 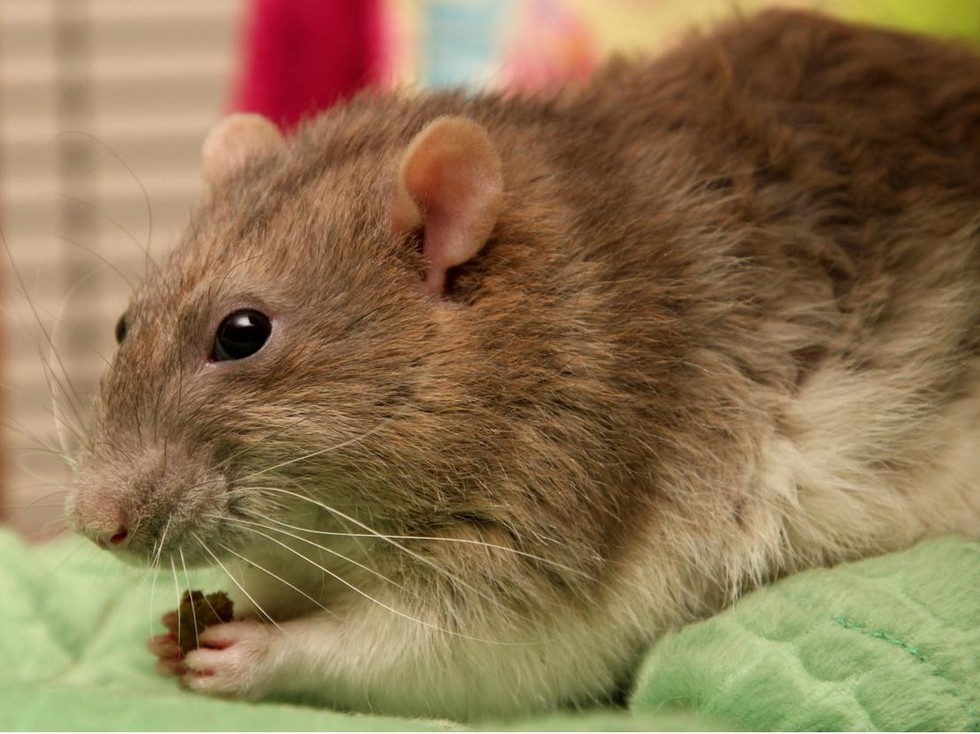 “Philip is a happy rat. He loves being tickled to the point that he really has no other interests in life, other than being held by the scruff of his neck. Whenever he is tickled, he bounces around & then runs back to be tickled again. He also enjoys licking hands. I once left my phone on the couch for a few minutes and he decided to take a picture and text it with the inspired caption of ‘Qua’ to one of my friends.”  – Source: http://many-splendored-rat.tumblr.com/image/107654451611 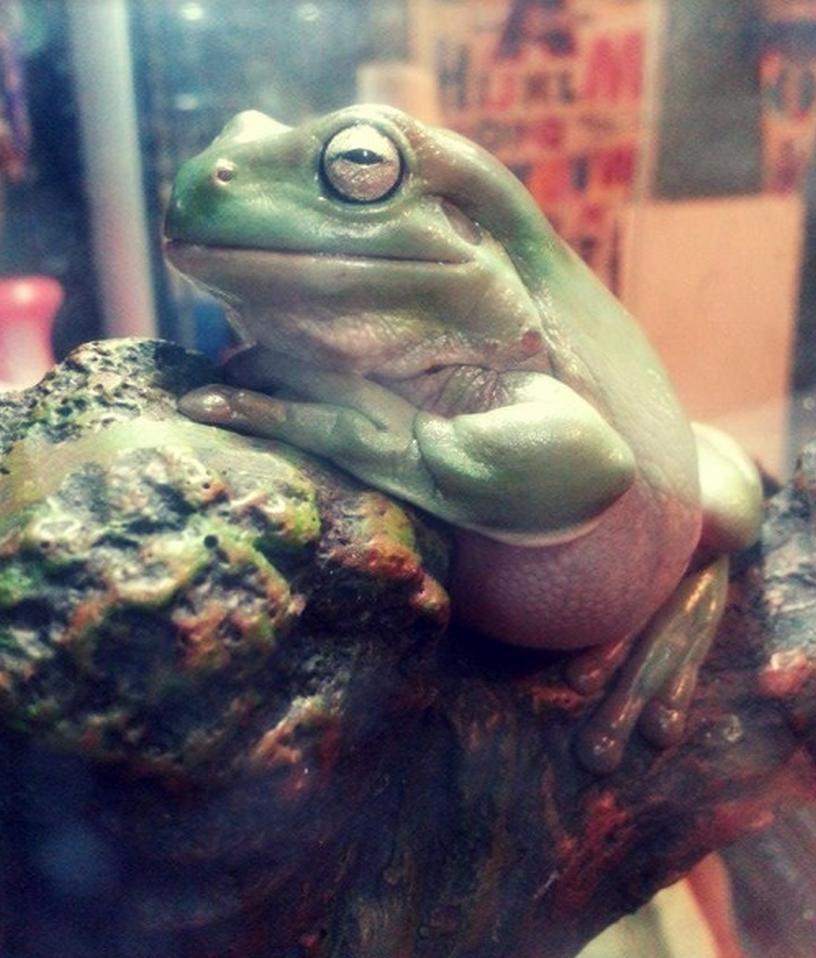 “I think it’s safe to say that Dave is king of the terrarium. Here he is, sitting on his throne with a belly full of crickets.”  – Source: http://earthandanimals.tumblr.com/post/110706574494 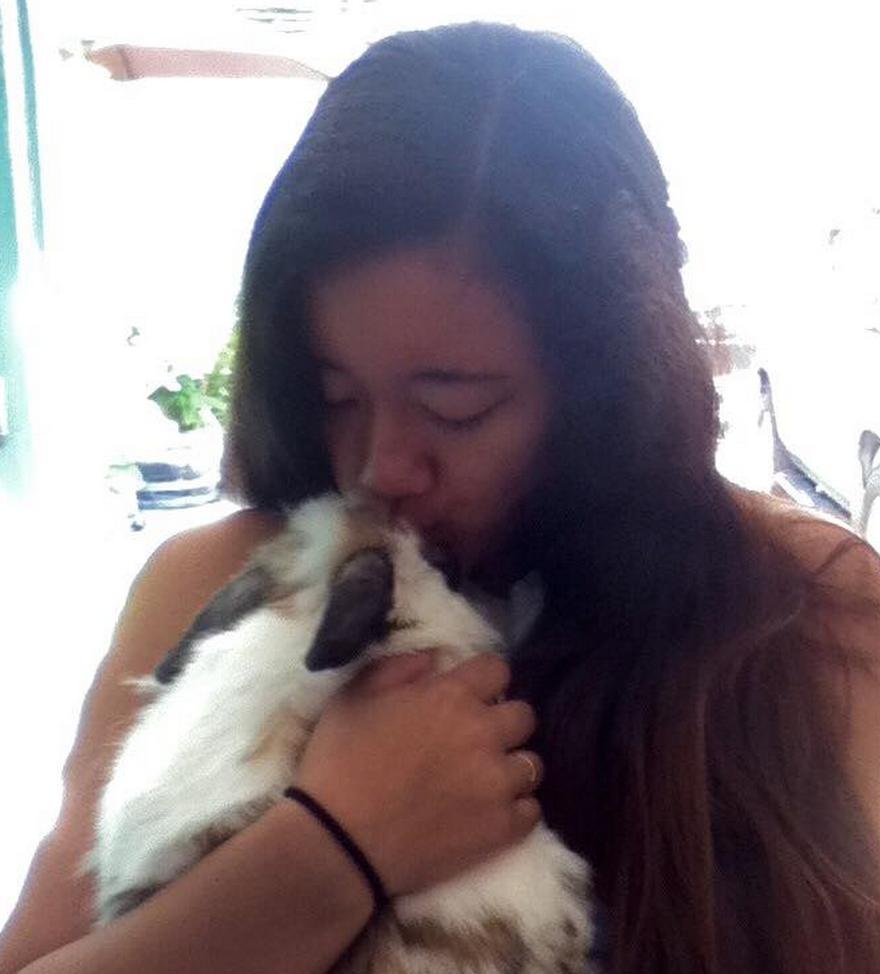 “This is my baby girl Souma. I adopted her from the Rabbit Haven, an organization that saves bunnies from the streets. She is my little study buddy. Whenever I do homework in the dining room, she jumps out of her cage (we leave it open and let her roam around the house – our house is rabbit proof) and starts nibbling at my feet until I pick her up and put her on my lap to sit with me. Then she always falls asleep, and it’s super adorable because my baby snores. I never knew bunnies could snore. Then when I try and wake her up she starts licking me and then just falls asleep again.”  – Source: Adriena Le 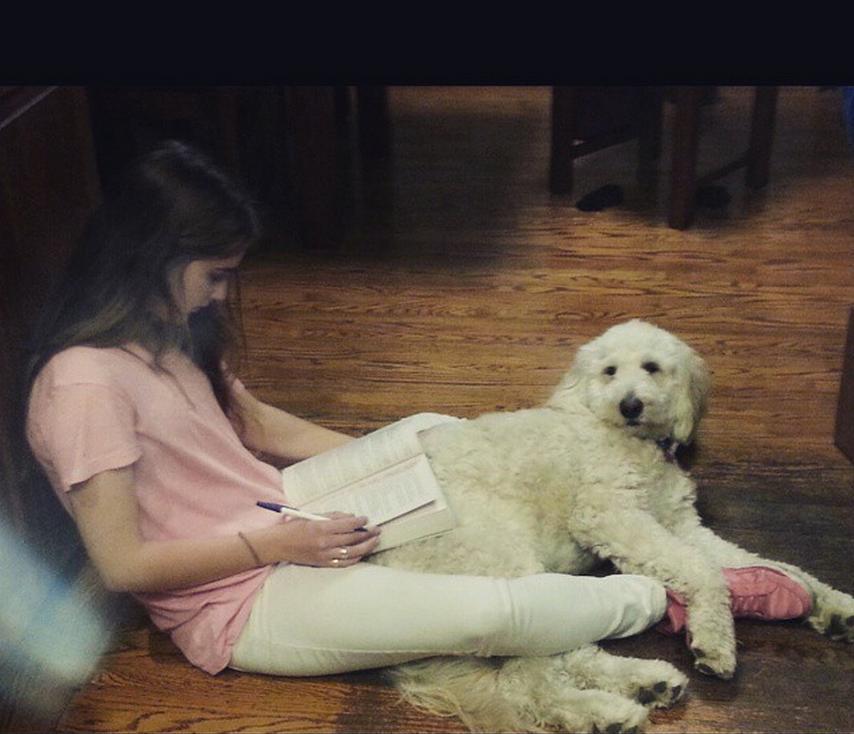 “Without meaning to, I trained my 3-month old, 15 pound Golden Doodle to curl up to me everytime I sat on the floor. Little did I know at that time, she would soon grow to be 70 pounds but still love cuddling with me.”  – Source: http://instagram.com/p/ybTYbhL9A0/?modal=true 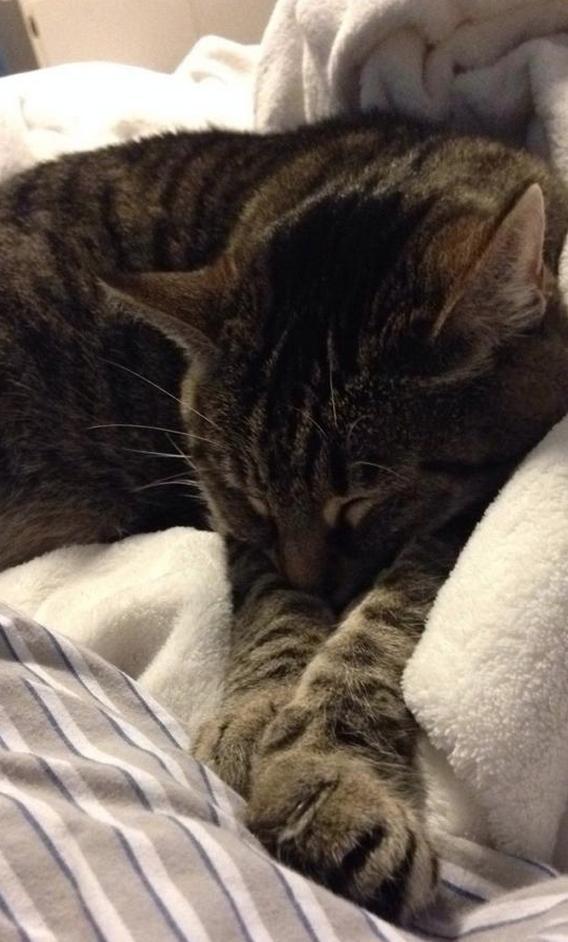 “My cat, creatively named Tabitha because she is a Tabby cat, is only sweet to me and my mom. She likes to bully my sister, but sits on my lap and cuddles with me all the time.”  – Source: Matt Liston 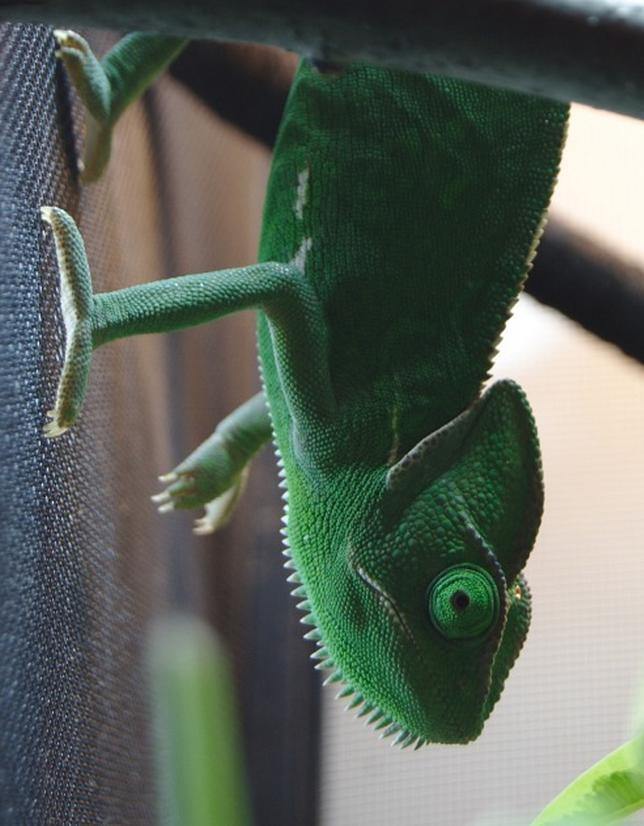 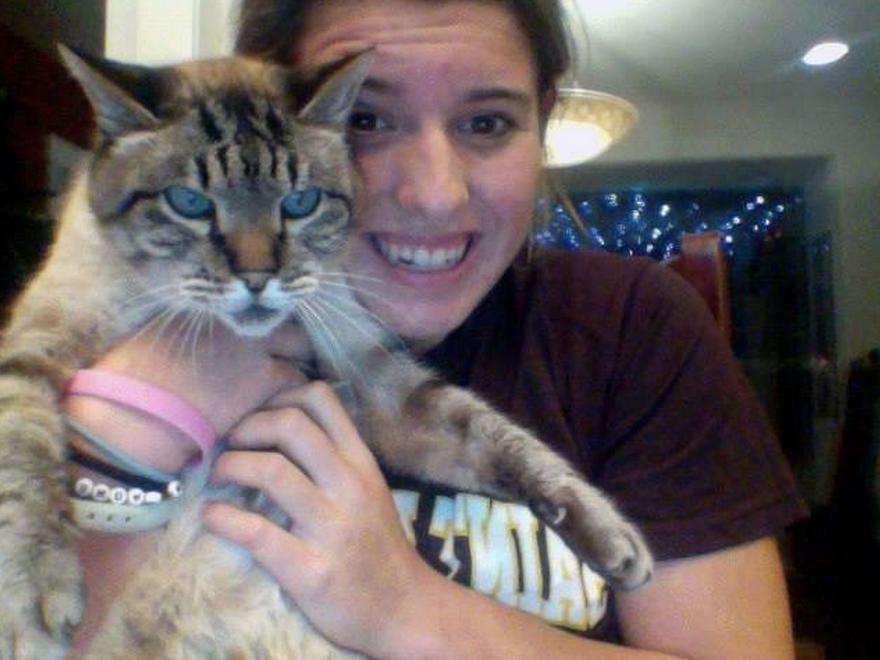 “Auto was the best cat ever. In 6th grade, I broke my leg and was stuck at home all the time. was very upset and mad about not being able to play soccer or do any physical activity. Auto would come to my room and cuddle with me because he knew I needed it. He quickly became my best friend. Auto had an ability to bring me happiness in my life and for that, I thank him.”  – Source: Lexi Schumacher 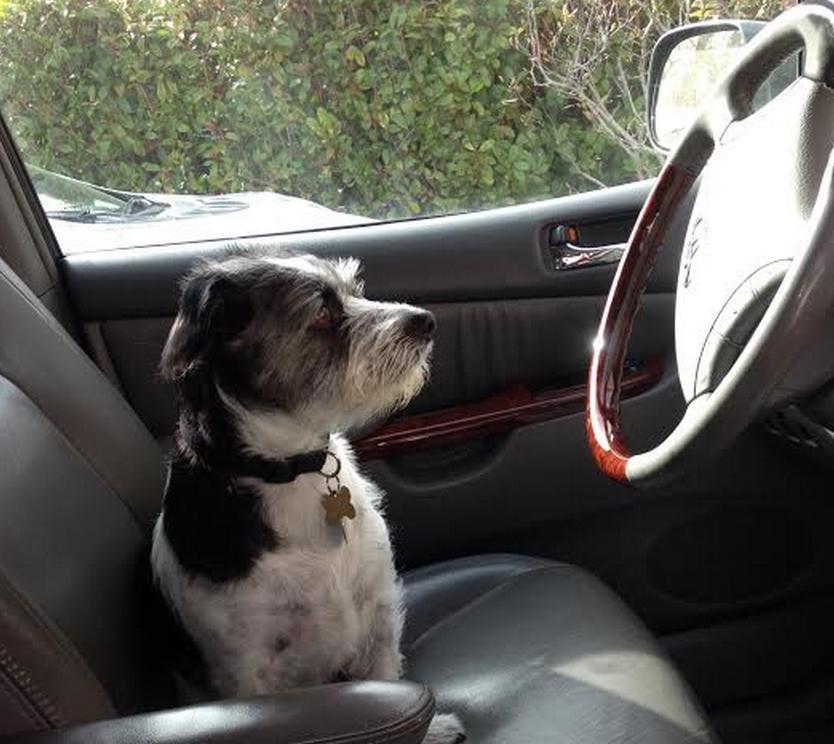 “Whenever my brother and I get into pillow fights, Snoopy misinterprets it and thinks we’re attacking each other. He’ll guard me from the aggressive pillow attacks and even chase my brother away.”  – Source: ‘ Snoopy’ by Rohan Shankar 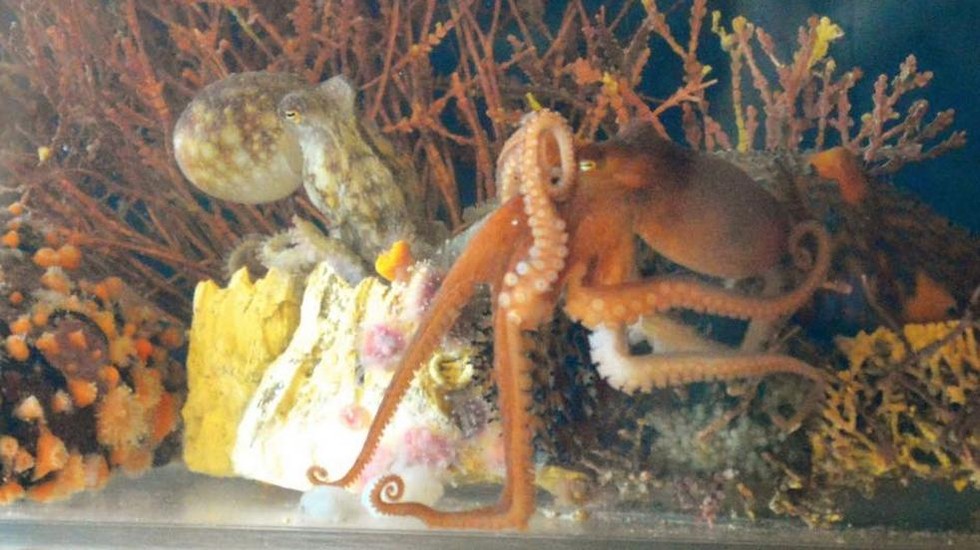 “Well, octopuses are very intelligent creates, smarter than the average house cat. They can actually remember tastes and sounds and touch which is super cool. So Jane and Morrie, named after Jane Goodall and the book Tuesdays with Morrie, respectively, would actually recognize the difference my finger and food. Whenever I put my hand in the water, their little arms would wrap around my fingers as they “smelled” or sensed me and it would be fun playing tug of war with their little suckers. It was fascinating and comforting to know my pets recognized me and loved me, as unique and wild as they were.”  – Source: Meg Kikkeri 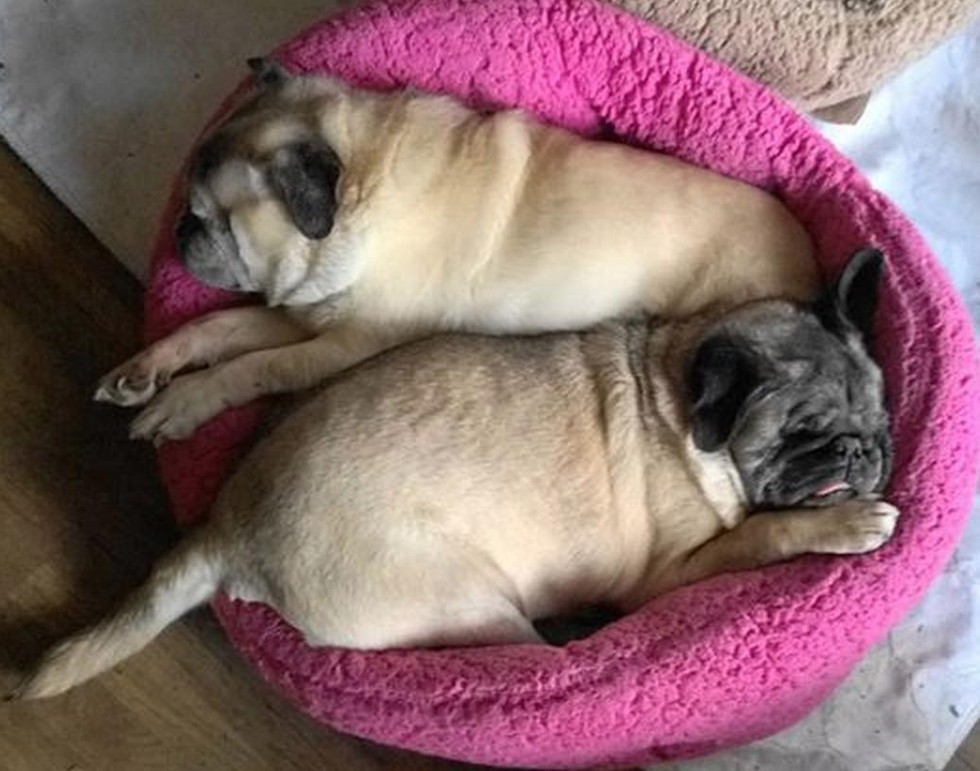 “Puggies in Pink….These two sweet old pugs, Jake and Jeff, cuddle up to say goodnight to everyone.”  – Source: facebook.com/oldfriendsseniordogsanctuary 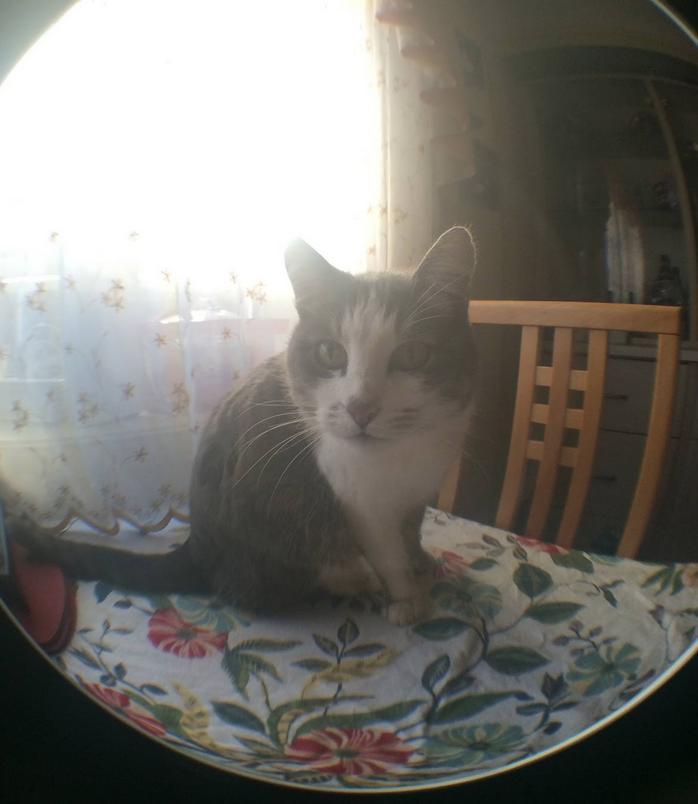 “One of my favorite memories with bickle was probably when he slept in my room almost everyday for two weeks. Whenever I would wake up to go to school, he would wake up and snuggle with me because he didn’t want to go outside. He would try to sit on me so I wouldn’t leave, but eventually i had to get up, feed him, and put him outside.”  – Source: Aly Basa 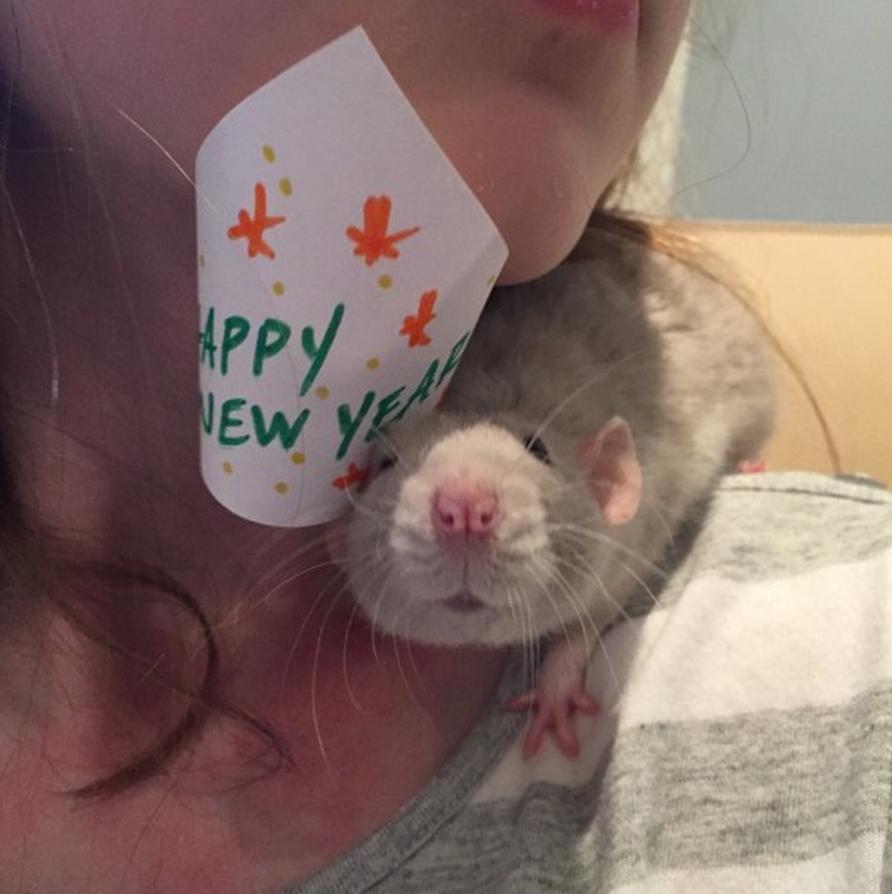 “Willow, one of my two adorable rats, refused to get into the New Year’s spirit and wear her hat. She is also a professional chef, her culinary special being rat-atouille.”  – Source: http://plantrats.tumblr.com/ 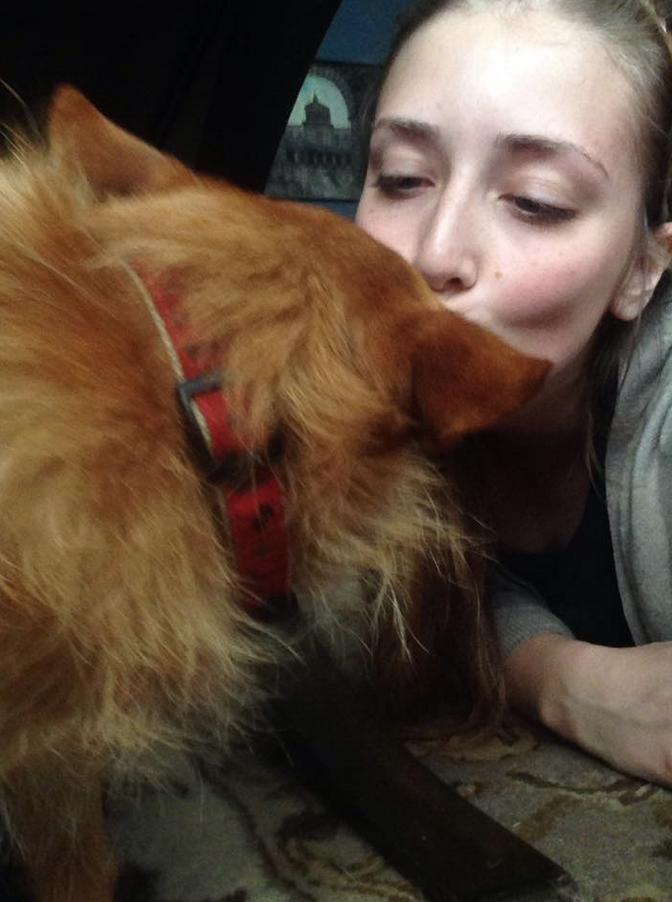 “One day when I was home alone, I heard the sound of someone walking. I called out, but they didn’t respond. My dog, Moose, started going crazy. He wouldn’t stop barking, even when the intruder muffled him. He gave me enough time to call the police by distracting the intruder. Though he is only 8 pounds, he makes a great guard dog.”  – Source: Kelly H-Franz 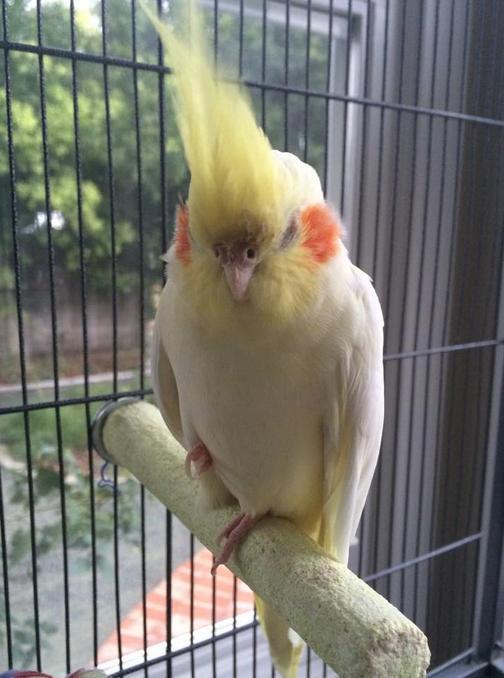 “When you hold my bird, Avery, on your shoulder she’ll scoot closer and closer into your neck if she’s cold. And if she’s particularly cuddly that day she will nudge you to rub her head. If you rub her ears, which I call her ‘rosy cheeks’ it will lull her to sleep – it’s so cute.”  – Source: Maddy Armer 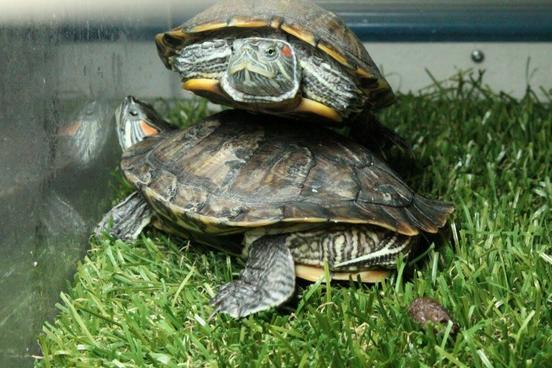 “The other day I saw my turtles, Michaelangelo and Donatella, positioned like this when I came into my room. I think they were trying to reenact Titanic.‘  – Source: Justin Lee 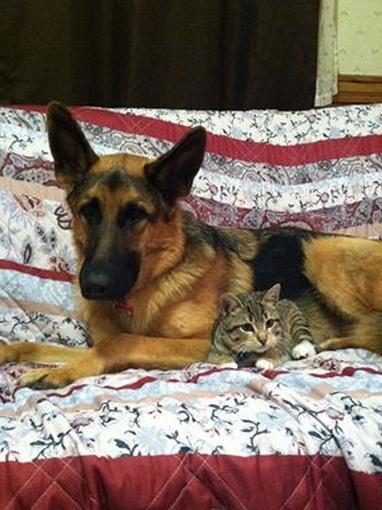 “We adopted Loki (formerly known as Boris) two weeks ago and he’s adjusted to his new home beautifully….he’s absolutely adored by his “big brother” Blake, our German Shepherd. The two are inseparable!”  – Source: https://www.facebook.com/sanjoseanimalcarecenter/photos 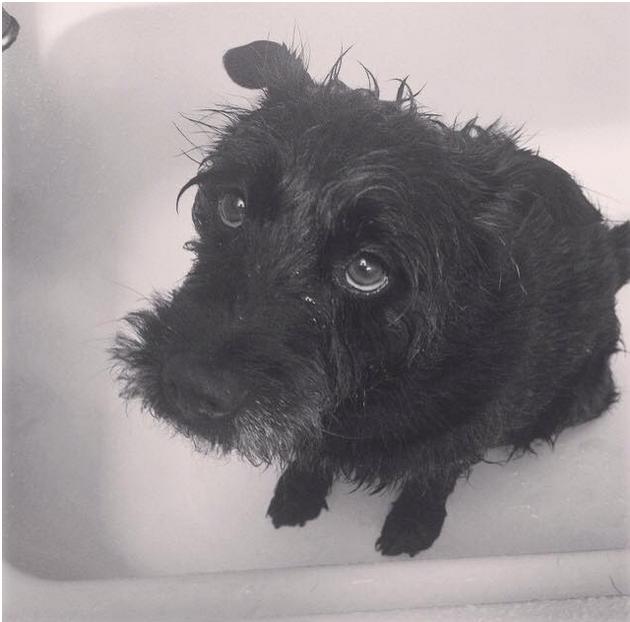 “At a pet expo a few says before my 16th birthday, I saw Scrappy and instantly fell in love with his scruffy messy black fur and he was also available for adoption. My dad agreed that Scrappy would be a good match for our family and our pets, and we adopted and brought him home. Scrappy never fails to cheer me up when I’m down and loves going on hikes with me. Scrappy is the best present I have ever gotten for my birthday and will also be my favorite (and only) birthday dog!”  – Source: Lexi Schumacher 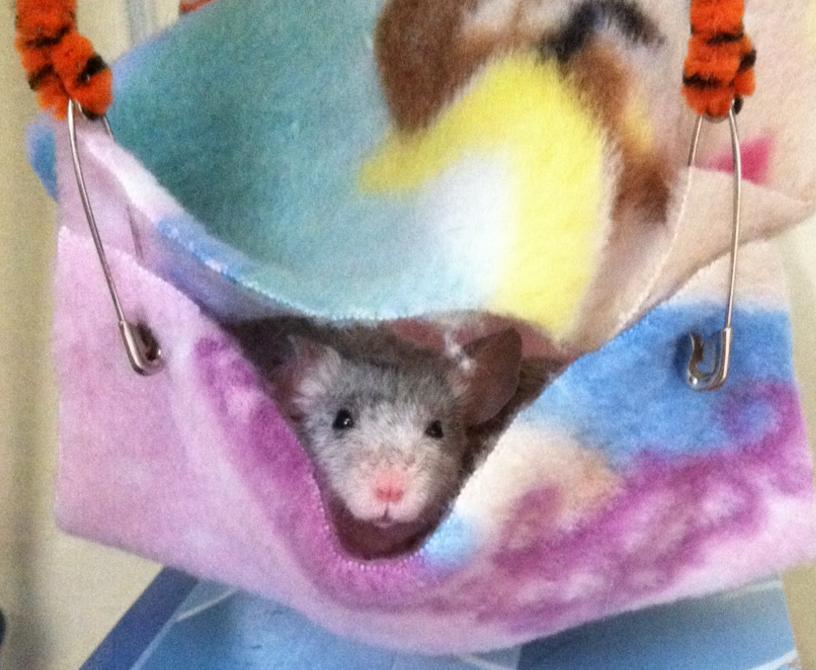 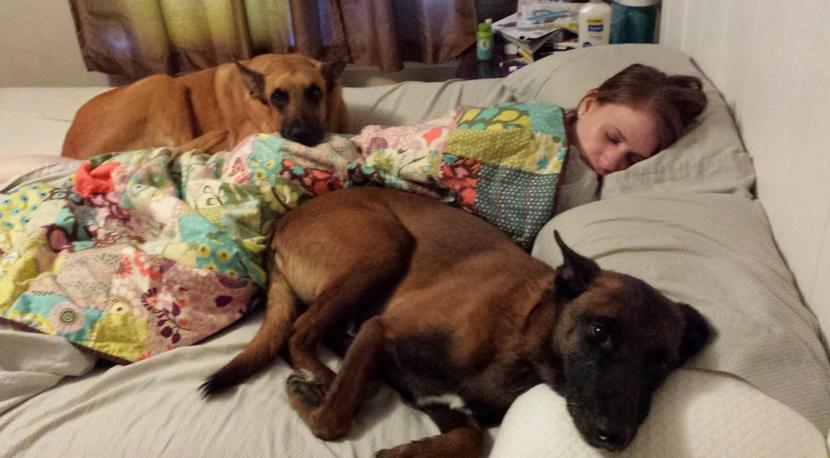 “This is what happens when I don’t get into bed the same time as my wife.”  – Source: reddit.com/r/aww/comments/1fo7pz

*Images included in this post are not owned by 1FUR1 Foundation. Quotes are paraphrased.