Gigi the Goat: A Brief Biography of Goat Assisted Therapy

Animal assisted therapy is not exclusive to dogs and cats. One little goat is making a big difference is many lives of Nebraska residents as one of the first goats involved in therapy.  Three days a week, a 20 pound goat named Gigi, visits the residents of Gateway Senior Living Center in Lincoln, NE.  Gigi helps the residents with depression, memory, and improves their moods overall. Data from multiple studies have shown that goats, dogs and other therapy animals can ease feelings of separation from loved ones, and reduce aggression and rage in Alzheimer’s patients (-via Laukaitis). 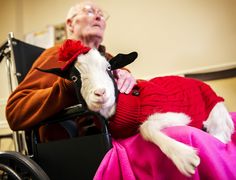 Gigi is one of seven goats owned by Jen Schurman, all who are trained as therapy animals. Schurman has been involved with animal assisted therapy for 12 years, training goats to be therapy animals for more than three years. She has been the activity director at Gateway since February 2012.  Like many other great discoveries, using goats as therapy animals began as an accident. Schurman, helping at a local fair, encouraged children who owned goats to bring the goats to the senior living center. When a goat was introduced, the residents of Gateway had a neutral response to the goats, with no fears or expectations of this cuddly farm animal. The goats were calm, and willing to sit in laps for hours on end. Since they have an internal temperature of 103 degrees, Schurman jokes that the goats are ‘like nice four-legged lap warmers”.

Though Gigi is very different from a therapy dog, there are a few similarities. She can easily fit in someone’s lap and petting her soft fur helps to lower blood pressure, heart rate, and stress levels. She might be the start of goat assisted therapy. No matter what furry creature is assisting the therapy, the results are all pretty much the same: happy patients participating in inexpensive, effective therapy.