I know we often focus on dogs, cats, and the occasional goat when talking about animal assisted therapy and activities. For World Animal Day, however, we’re going to switch gears a little bit. We’ve briefly touched on the fact that wildlife helps with animal assisted therapy with the assistance of licensed therapists, but today we’re going to zero in on two unique cases.

People are often taken aback when they find out elephants help facilitate therapy. It only makes sense – elephants are gentle and intelligent creatures. When children with disabilities come into contact with them, they cannot help but be awed and inspired by these amazing creatures. The first case of animal assisted therapy using elephants helped a blind young girl become more confident and change her life for the better. 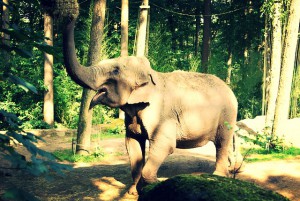 There are only three elephant types that exist in the world largely due to the ivory trade and habitat loss.  Once common throughout Africa and Asia, elephant numbers fell dramatically in the 19th and 20th centuries and now the global population is down to only 200,000.  In the U.S.A. elephants are suffering in other ways; sold on the black market and being forced to perform in circuses and other animal shows.  One organization has made it their mission to rescue these gentle giants and provide them with medical care and space they need to live a healthy life.  Please click here to learn about PAWS (Performing Animal Welfare Society) based in California.

Dolphins are being hunted, slaughtered or captured.  The captive industry has become a billion-dollar worldwide trade, with all money made from the exploitation, imprisonment and lifelong suffering of these sentient beings.  Rescue organizations, like Sea Shepherd Conservation Society, launched its Operation Infinite Patience campaign. Their presence of volunteers from around the world who remain on the ground in Taiji, Japan documenting the cove throughout the entire dolphin hunt season.  Click here to learn more about this initiative and see video of this reality.

These wildlife animals are two of the kindest, most intelligent animals on the planet. They are also in grave danger. Both are being poached almost to extinction. Elephants are hunted for their tusks, while dolphins are hunted for their meat. Not only would both of their ecosystems drastically change, but we would also lose two amazing creatures.

This World Animal Day and everyday, 1FUR1 urges you to take action! Please let us know of deserving US non-profits that help animal or donate to help save animal assisted programs.